Cloudy Too Has Just Retired: We Will Miss Your Fire 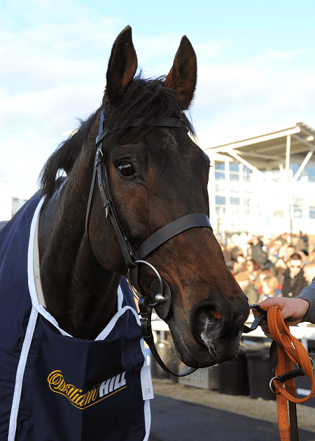 On a slightly different note, we would like to take this opportunity to say a few words about one of our stalwarts of Formulated Polymers albeit not of the human kind but of the animal kind!

The time has come to bring the curtain down on the career of our racehorse Cloudy Too at the grand old age of 12 and allow him the opportunity to have a long and happy retirement in North Yorkshire being waited on hand on foot, something he so richly deserves.

Over the past 8 years as many of you will know, Cloudy Too has raced and represented FPP in the world of horseracing and has been an incredible servant not only to the company but also the family. His achievements have far surpassed anybody’s expectations of a young 4 year old horse bought to have a little bit of fun with and really became a household name in many National Hunt fans eyes’ over the years.

In his early days he started his career off over hurdles and it soon became clear that he had a fair amount of ability taking a novice hurdle by 14 lengths. His chasing career initially struggled however but was given plenty of time to gain some confidence back over hurdles before embarking once again on his chasing career where he really took off and never looked back. He managed to win a Listed race, Grade 3, Grade 2 and finished runner up in a Grade 1 during his wonderful career whilst also running many gallant races in defeat which included leading the 2013 Hennessy field to 3 out and perhaps most important of all, competing in the 2014 Gold Cup.

His greatest strength was his never say die attitude which in many respects may have hindered his career somewhat as he suffered on a couple of occasions from a fibrillating heart and it is testament to his character that he made it back to the track as often as he did.

It goes without saying that Sue and Harvey Smith and all of their team at Craiglands Farm have played a huge part in his successful career and that all of us at FPP want to take the opportunity to thank them for all their hard work over these most memorable years.

So all that is left to say is thanks for the memories old lad and have a wonderful retirement!